In honor of photo Friday, I’ve decided to put up some sick pictures from the football game last night, and some of one of my favorite blogger who is in the running for winning a blog award.

My cousin and I after the great win that the Lancers pulled off. It was a nail biter down to the last 2 second 47 yard field goal!
And now for this guy.. His name is Steve, and he is HILARIOUS! His blog highlights my day, and right now he is in the running for EverymanTri.com’s Best Sport Endurance Blog of 2008, and I think you should vote for him, because he is SO FUNNY. You can vote here, for Steve in a Speedo, or visit his blog here. Here’s how I know he’s funny.

Oh possibly because he ran a whole race, and more than one for the record, DRESSED LIKE THIS! Yes, he’s the grim reaper behind those little boys!!
Oh wait, then he also dressed like A TOMATO for an entire race! 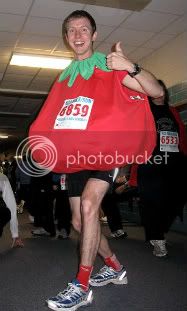 If those aren’t funny enough, he’s really fast too! So yes, that’s my plug for him to win the endurance blog of 2008. I just think running in a costume is hilarious. So again, You can vote here for Steve in a Speedo. I can’t imagine EVER running in a costume.. and he’s done it numerous times. More races in costumes Steve!!!
Today I’m a little more sore than I was yesterday, Amp’d abs got to me for sure. Those push ups made my arms into non-working noodles. Tomorrow I’ll get in a run, and hopefully Mr. R will ride beside me on the bike. Then it’s more entertaining. :) Sunday will be my day off and I’m going to enjoy it and feast on Taco Bell. With all these posts about Thanksgiving and Christmas, I’m so hungry for good homemade food! Well everyone, have a great weekend, I’m going to the Oakley outlet sale because Mr. R is obsessed with all their gear… Me, not so much. Hopefully my hat will come soon and I’ll put up a review of how AMAZING it is! :)
xoxo
Tags: photorunning