From Start to Finish

Honestly, I’ve seen many race reports, and I have NO IDEA how all you fellow runners can recap your races from miles 1-13.1, especially a marathon! You people are amazing. I got to mile three and though, WOW! Mile 3! So here is my recap of my first 1/2 Marathon, as much as I remember at least.

The night before I was going through my clothes figuring out what to wear and I realized I had nothing to wear. Following my many lovely reader’s advice, I pretty much wore some old favorites that I love running in. I laid out all my clothes and went to bed after the amazing comeback of the Rays in the ALDS.

So I got up super early and Nicole came over, I grabbed a honey and oat bar then we took the back way to the parking area, since I live only about 15 minutes away. We parked about 400 meters away from the start line, even though when we were parking we had no idea where the starting line was. It was absolutely FREEZING and we had to make a little potty break so we ventured out of the car and saw what were the most entertaining people in the world. Now I know why you guys run so much and actually race. The people watching was borderline the best I’ve ever seen. The people we saw were in every outfit imaginable. Hats, glasses, clothes, almost naked, shoeless (??) it was a hoot! Nicole and I walked around just staring at people and their outfits. She and I were in like regular old clothes, no dry-fits, no visors, nothing special at all.

We decided it was time to strip down and leave our sweatshirts in the car at about 7:00, so we went back and by the time we got back out of the car it wasn’t as cold because the sun was coming up. So we jogged for about 5 minutes and stretched against a light pole and then found our place in the middle of Corral B, because we didn’t want to be anywhere near the front of the pack. The Star Spangled Banner was sung and the bell (another ??) went off! The first three miles flew by; I barely remember seeing anything or even feeling anything. In the first three miles we ran up pretty much the only hill and along the bay. The weather was amazing, but the sun was really bright if we were running into it.

I think around mile 4ish, 5ish, 6ish, we entered the beach part of the run which was along the sand and ocean directly into the sun. Talk about bright! It wasn’t hot though, and so I didn’t sweat, during the entire race. The course was really flat and relaxing and the entire run very few people passed us, but I worked on continuing to pass runners and keeping my pace very even. I wasn’t even working hard at all. I grabbed a cup of water and took a sip at mile six because my mouth was so dry. I looked at my watch at mile 7, and saw that we were pretty close to our goal of finishing in less than two hours, but it was going to be close. I knew we would have to work the last two or three miles at a faster pace. Then we started the turnaround I think at mile 8ish. This is all a guesstimate, I seriously have no idea. And I was feeling great. At every other mile I’d take a cup of water. Drinking and running is something I need to work on. More went down the front of my shirt and number than anywhere else.

People at the water stations were out of control. Throwing water over their heads, throwing their cups down like it was a grenade, splashing up water everywhere, I tried to avoid the craziness and either stayed on the opposite side or ran in the middle of them. Those stations were entertaining. I would always try to drop my cup in the grass or on the side so that it wouldn’t land on anyone.

Each mile we passed I kept thinking, okay, only 10 more, only 8 more, only 5 more. Pretty much every mile I was like, wow, already this mile! Cool! There were some random people all along the course, who were really nice to make signs and cheered and clapped for everyone. I passed a huge poster full of Vaseline and wondered what that was for? Ohhh, okay, got it. Yea, left that alone. Then we got to mile 9 and I was feeling really great. My legs were almost numb, it was weird, but a good feeling that lead me to start pushing myself a little bit harder. I started working a little bit more and my competitive side came out. It was around mile 10.5 that I really started working a lot harder and realized that if I wanted to make finish at 2:00 I would have to really start kicking it in. It’s not that we were super boxed in at the start, but I think it really didn’t allow us to use the first mile to our advantage at all.

So after that the afterburners kicked in and I started to run a lot faster. I still felt great and this guy in a blue shirt was running by me and looked at me and said, “Come on girl, Come on.” About every minute he would shoot back a word of encouragement and I ran with him for the last two miles. He stayed just ahead of me, which drives me CRAZY because I force myself to stay with him. He kept yelling at me that I could do it and that we were almost there. I was freaking out though because I had no idea how far the finish was from where we were when he started sprinting away and one of my biggest problems is starting my kick WAY too early and then dying and not finishing well. He seriously saved me from not making it to under 2:00. I would have been so disappointed in myself if I didn’t make it under and his words of encouragement were so great. I wish I took a picture with him. He would just keep yelling at me to go and it was amazing. So thank you to the guy in the blue shirt!

I started down the little slope to the finish line and saw the clock. I realized that I was about 300 meters away so I sprinted. It was ticking away and in my head I just thought, NO!! Don’t hit 2:00, but it didn’t, and I finished in 1:57:00. If it wasn’t for that guy, I probably wouldn’t have pushed myself so hard the last two miles, especially the last mile split being 6:15! Yea, after running around 8:20-8:55 the entire race, my last mile split was almost my best high school mile time. When I crossed the finish line I was like Yes! I did it. And then I thought to myself, that was it. So yes, I am definitely ready for this upcoming weekend’s Nike+ Women’s Halfer. I also pretty much have my next year lined up with more halfers and once I get everything situated and on my calendar, I’ll see who else will be running what.

It was seriously an amazing experience, from start to finish and I’m so glad I did it, but now I’m addicted. I never thought I would be able to run that far. The night before I was talking to my boyfriend and said, “What if I get to mile six and think like, eh, I’m over this, and just want to stop?” He reassured me that I wouldn’t think that, and yes of course he was right. :) I absolutely loved it and all my family and friends that came out to cheer me on and just running past the most absurd people ever.

It was pretty inspiring to see all the runners out there though, from all walks of life, and all ages. Great job to everyone who finished it! Here are some of the pictures, and yes, I know, I look far too happy, but I was happy!

This is by mile 4

My dad rode along side me for a little bit. Then he got in trouble by the motor cop police.

Mile 11, yea, I was trying to run harder at this point.

Nicole and I finished the race. :) 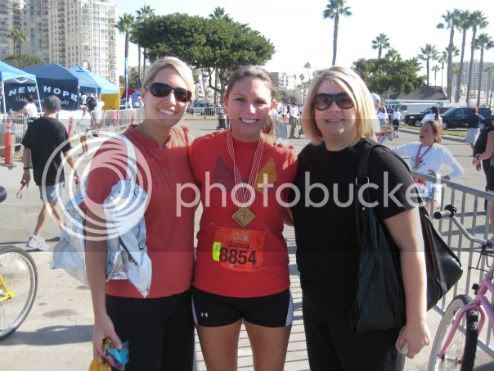 My wonderful cousins and mothers to the baby cat, Presh, were there.

My dad and I after the finish.

We were told it was good for us? 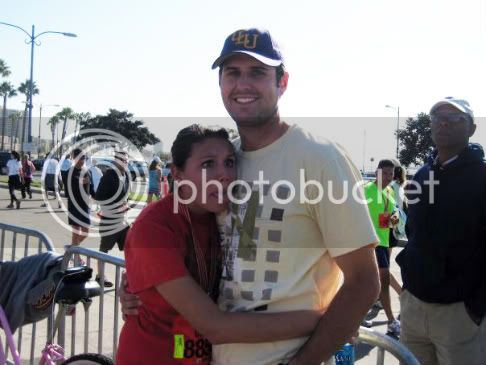 Ha ha, just kidding! I wasn’t about to throw up. 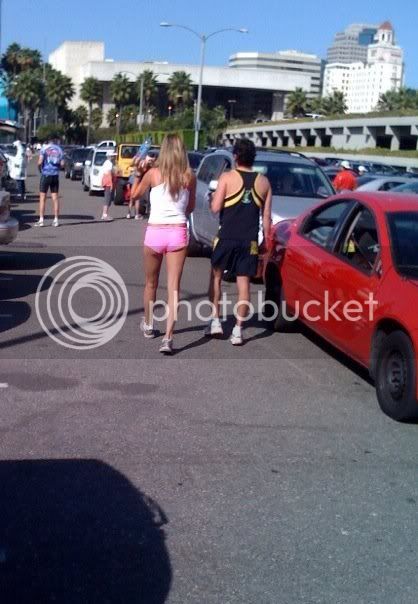 I was stalking this lady for like 15 minutes to get a good picture. Seriously. Welcome to Long Beach!

More pictures will probably come, and this week I found even more cute breast cancer stuff, a few new great songs, and a review of the MioPINK Motiva Heart Rate Monitor Watch which I got this past weekend for my birthday from my cousins and I’m so excited to use it! :)

But tonight, pray for Eli Manning to do well so my Fantasy football team will win, and pray for the fires in CA to not get out of control, because then I’ll have to be putting in time on the DREADMILL!

Good runs and poopy ones

I should know this by now..

Mileage for 2009 and last reflections